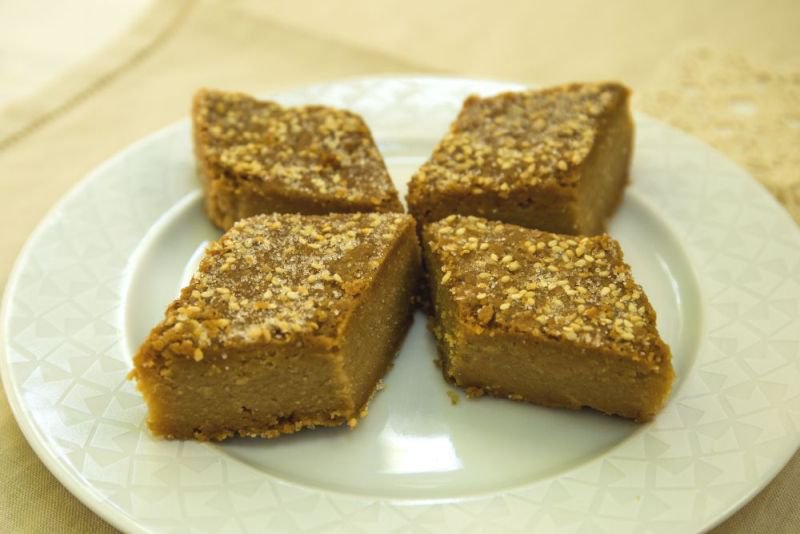 This is the sweet most usually made all over the island; it is made for parties, feast days and festivals (panegyria). It is also made for New Year’s when it is called Vas­silopitta, and weddings when it is called Gamopitta. It is a floury halva baked in the oven. It contains olive oil and flour, sweetened with syrup, honey or sugar and is named accordingly. It is prepared the same way with only the proportion of sweetener differing because of a different composition of ingredients.

If the ladopitta is well made it is truly exceptional. It needs careful attention to the details of preparation to achieve a successful result.

Its origins are from agricultural Lefkada, where olive oil was a family product. Town dwellers bought the oil – always precious and expensive – but in recent years, after the war, hoosmeri was adopted for New Year’s mainly. To prove my point, I can assure you that even the most efficient housewives did not have the skill necessary to make it, so they would ask neighbours or relatives who came from the villages to make the pie for them. One year, my mother, who came to town as a bride from Kavalos and was an expert, made seven­teen pies in neighbours’ houses.

To regulate the quantities you will need, bear in mind that the thickness of the pie must not be more than 3 – 31/2 cm. to cook through. It must be well cooked in the pan so as not to be slushy.
These quantities are for a baking pan No. 34. Be sure to spoon up a small part, like halva, to taste it. All in­gredients are calculated per full cup, but a little less for the olive oil.

Preparation: Put the honey with water and spices to heat and come to the boil once and keep hot. In an­other roomy pan, heat the olive oil. This is crucial: it must be so hot as to leave tiny bubbles on a wooden spoon. Then add the flour, stirring vigorously to avoid any undissolved lumps.
Careful! Sufficient flour must be added so the mixture is runny, that is dripping off the spoon when lifted. Continue stirring until the flour is golden, with a properly cooked smell. Then add 2 – 3 ladlefuls of the syrup and stir till absorbed. Continue adding syrup a little at a time, stirring until it is all absorbed. Con­tinue cooking till the mass comes away from the sides, and take off the heat.
Scatter the baking pan with sesame seeds. Put the halva in it, smoothing the surface so it even. Scatter more sesame over the surface, and level the surface of the pie with a piece of greaseproof paper and a spoon Cut it into lozenge shapes and put a blanched almond in the centre of each. Bake the pie in a preheated oven at 200ïC (if air heated at 180ïC) for about 45 mins., un­til it forms a crust. Take the pie out and 5 – 10 mins. later, dust with sugar and cinnamon. Cut up when completely cold.