Nydri, Lefkada: The cosmopolitan village that will astound you 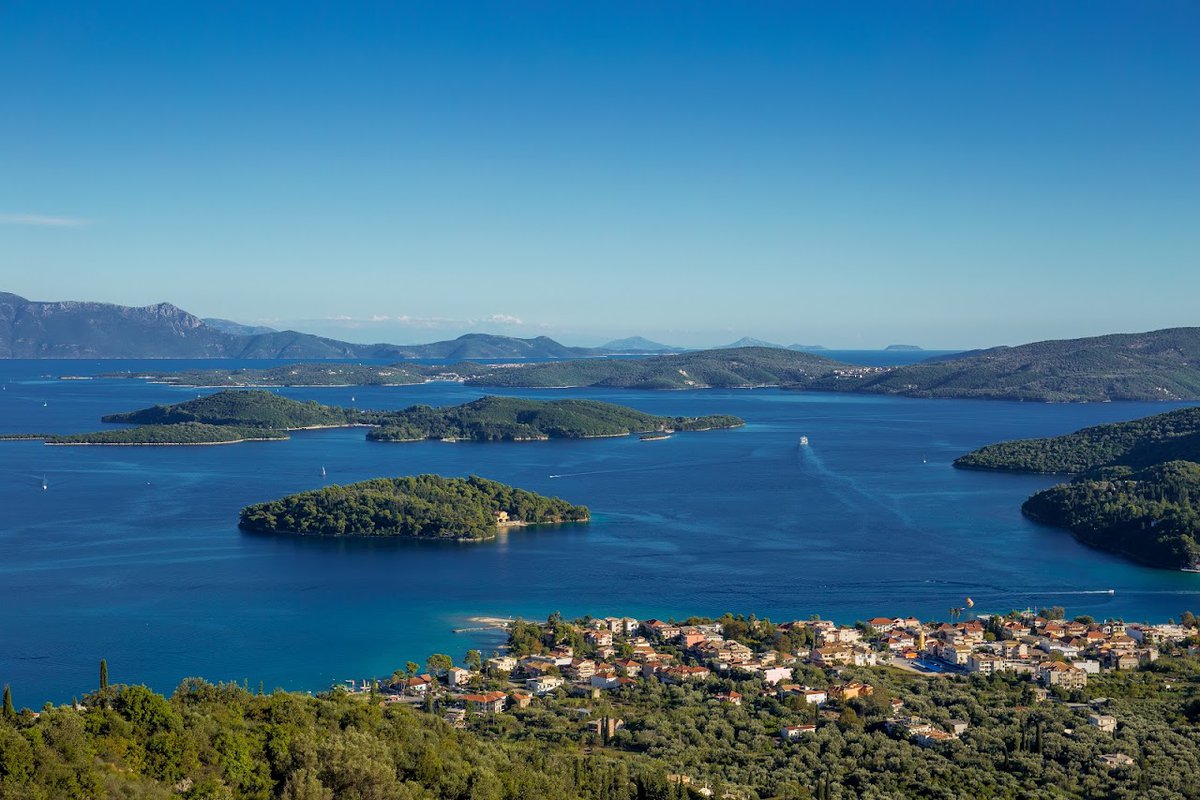 Nydri is the embodiment of Lefkada's worldly character, boasting an island ambience, top-notch tourism infrastructure and significant environmental and archeological sites. Whether you're a beach fanatic or water-sports fan, a restless hiker or a seasoned cyclist, a bar hopper or a foodie, you'll find everything you're dreaming of.

To a large extent, Nydri owes its repute to Aristotle Onassis' private resort on adjacent Scorpios, a small island purchased by the shipping magnate in 1963. Here Onassis threw legendary parties and hosted the crème de la crème of his jet set contemporaries, spawning the rise of Nydri from a humble fishing village to a cosmopolitan destination that gained worldwide publicity. It remains one of the island's top picks for travelers who appreciate its harmony of excellent services, simplicity and beauty.

Two parallel streets lined with a plethora of cafes, restaurants and boutiques comprise Nydri's "commercial center". Before you explore this bustling marketplace, follow your nose to one of the famous Kominatou bakeries and treat yourself to an oven-hot pastry or delicious bread, handmade with their heirloom family recipe.

In summer Nydri is abuzz with energy, with its lively promenade and charming palm-tree lined harbor where locals and visitors love to meet. Take a leisurely stroll and absorb the divine raw beauty of the picture-perfect surroundings, especially if you're a newcomer.

Don't miss the opportunity to take a day cruise to Lefkada's most popular beaches and adjacent islets - Scorpios, Madouri, Prigiponisia - as well as the closest Heptanese islands, Kefalonia and Ithaca. Boats embarks from the port in the morning. Cruise durations are usually 8 hours.

If you want to discover the Ionian's hidden gems on your own, rent the luxury yacht Aggili for a customized private day trip to the emerald coves of your dreams.

With its incredible turquoise water and thick champaign sand peppered with tiny shells, Nydri's beach is tailor-made for endless hours of lounging and relaxation under the sun, with its calm seas - perfect for families - and all the amenities you need. Two incredible seaside beach bars with a boho aesthetic, delicious food and quality entertainment are open from morning to night. Savor a refreshing cocktail at Maraboo with upbeat tunes and a lounge atmosphere. Enjoy exquisite design, a panoramic view of the adjacent islets and a sophisticated menu + signature cocktails at Sailinn Beach Club.

Lounging on the beach and having a leisurely swim are OK, but sometime you need a bit of adrenaline. And Nydri is the earthly paradise of water-sport devotees. So if you're in the mood for fun in the sun, Kavvadas Water Sports will guarantee you have the time of your life riding Ringos and Fly Fish, water skiing, parasailing and more.

Read: Lefkada is synonymous with sports

Dimosari Waterfalls are yet more proof that Lefkada is blessed with places of rare beauty and a natural environment so versatile that it never fails to enchant. Swim in the waterfalls' natural pool with its blue-green water and impressive lush surroundings or dive in from the cliffs if you dare!

How to get there + tips.
Just past the center of Nydri, take the peripheral road on your right. You'll soon see signs for the waterfalls and in roughly 3km, you'll arrive at the parking area where you can leave your car or bicycle. From there it's a 15 minute walk on a relatively easy footpath. The waterfalls have much less water in the summer months than they do in spring, but no matter what season you go, it's well worth a visit. Make sure you wear closed athletic shoes - there are some slippery spots along the way.

On your way back, stop at Cafe Platanos near the entrance and enjoy a fresh-squeezed juice or an iced coffee in the thick shade of the plane trees. There's also a souvenir shop with adorable mementos by the cafe.

In the early 1900s, German architect and archaeologist Wilhelm Dörpfeld discovered and excavated 33 prehistoric burial mounds near Steno at Nydri. He initially believed these were royal tombs connected to Homeric Ithaca, as the artifacts were consistent with wealthy burials and he theorized that Odysseus' homeland was, in fact, Lefkada. Though the tombs do not contain eponymous royal families, they attest to the existence of an Early Bronze Age (2900 - 2200 BCE) ruling class with wealth and power, making this site one of the most significant monuments of the prehistoric Aegean World.

Madouri, the tiny verdant island opposite Nydri, permeats the work of Aristotle Valaoritis on so many levels that, with time, the island and the poet have become one and the same. Beneath the ageless olive trees, Valaoritis composed the story of armatole "Astrapogiannos" as well as his later, unfinished, "Fotinos". Today Madouri still belongs to the Valaoritis family estate, but day cruises take visitors close to its shores so they can admire the poet's beloved hermitage.

Agia Kyriaki is a picturesque whitewashed chapel literally carved out of the promontory on which it stands, which is why its also known as the "stone's church". Its location is idyllic, with trees that stretch right to the cusp of the sea.
Legend has it that when sailors passed this spot, a glow of light could be seen emanating from the bedrock but as they approached, the sea would swell so they couldn't approach the shore. When Nikos Kakonas, the owner of a neighboring property, found an icon of St. Kyriaki in a cave here, he vowed to build a church in her honer, which he completed in 1906. Since then, the sea calmed and the mysterious light vanished. While the church was being built, pieces of ceramic vessels depicting dancing nymphs were unearthed, indicating, according to Dörpfeld, the existence of a temple dedicated to them on this site.
How to get to Agia Kyriaki

To reach the church by car, follow the signs for Desimi and Geni, just past Vliho and take the left road when you reach the junction. You can also visit the church by boat from Nydri.

Where to Eat in Nydri

Tom's Seaside Restaurant, with a history stretching back to the early 70's, is a must when you're in Nydri. It's a meticulous and authentic seaside tavern right at the water's edge. No matter what you choose from the menu, its guaranteed to be freshly made with choice ingredients. Dishes include delicious stews and casseroles, fish from the day's catch and juicy cuts of meat from local farmers. The impressive view towards Scorpios, Meganisi and Madouri and another plus here.

Avra Beach Restaurant is the epitome of home-cooking. The tavern is neat and tidy, without fanfare, as the true protagonists are uncluttered dishes inspired by gastronomical tradition and seasonal availability of ingredients. Choose from an array of melt-in-your mouth meat and vegetable dishes and fresh-caught fish prepared just like its done at home. Another feather in your cap here is the breath-taking sea view.

Minas at Nydri raises the bar of Lefkada's gastronomical scene with mediterranean, seafood and creative gourmet finesse. The result is a divine cuisine that captures the scents of summer in every delicious bite. Start with a refreshing Lefkada salad and warm Eglouvi lentil puree with Corfu's cured nouboulo and fresh truffles. A main course must is Minas' seafood casserole, an emblematic dish that's certain to steal the show. For dessert, enjoy the deconstructed tiramisu with delicate mascarpone creme, rich coffee mousse, caramel sauce and brownies. The view is as extraordinary as the food!

A temple of seafood delights, Fishbone's name makes its intentions clear from the get go. It's laid-back, friendly atmosphere, excellent service and astonishing view are only the groundwork for their ecstatic finger-licking food - generous portions of yummy fresh seasonal fish, succulent lobster linguini and perfectly creamy seafood risotto.

If you love good wines, make a visit to De Blanck your top priority. Their selection of excellent local and international labels is a temptation you shouldn't refuse. Treat yourself to a few bottles to share with friends or take back home as gifts for your loved ones.

Where to stay in Nydri 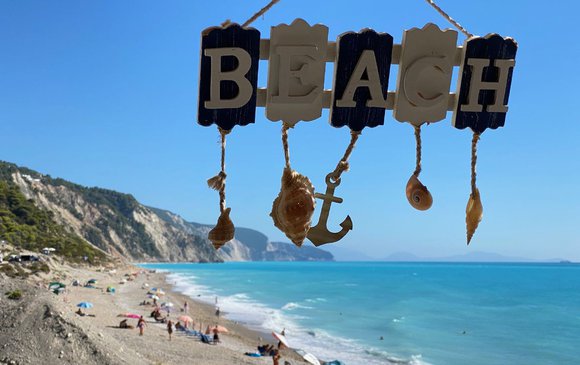 7 beach bars in Lefkada you don’t want to miss! 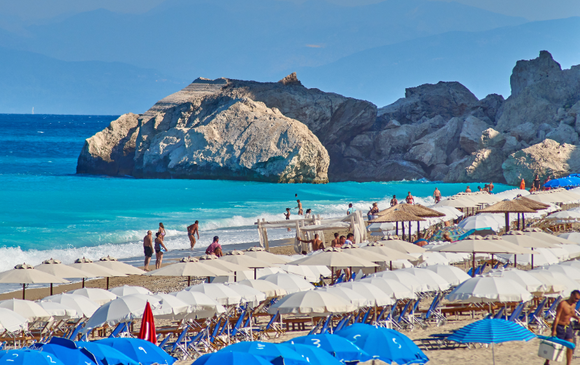